So I said in the last post I’d keep you all up to date on the training etc, well let me tell you how March went – NOT TO PLAN – welcome to Marathon training!

February ended well, completed my monthly target mileage in UL with Maeve R, a lovely break from tumble turning every 25m, and swimming in wide 10 lane pool, ahhh they have it nice there in their 50m wide lane pool (sorry can’t hide my jealously)!

I rolled into March, plan in place, knowing what I needed per week to get my monthly target done. I still do other things besides Swim, I run (less than I used to, but still some), I have pilates, and fit in TRX when I can. I like my mixed up balance of exercise.

My running club have been following a couch to 5k programme, and the club members help out on various nights as run mentors. I like this, it suits my kind of run training at the moment, so I volunteer to go with the group one Thursday night when someone else was unable to make it. It was a dark, wet yeuky night, a hat and gloves kinda night, and as I was running along with the group, I stumbled off the side of a footpath and fell, splat, onto the ground, one of those falls when you bounce back up so quick in denial that you actually wiped out in front of a group you are supposed to be mentoring! I continued running the rest of the plan for the night, my knee was sore but pants was intact so thought I Just bruised it. How wrong was I. When I got home later I saw the damage I had actually done, I’ll spare you details, but it wasn’t just a bruise, plenty of bandages later and I could already feel the throbbing through my whole leg. I texted Coach and said I wouldn’t make training in the morning, told her I fell and spared her the exact details for now!

For the next 8-10 days I was out of action, from everything. There was no way the knee and all the oozing cuts could go near a pool, no mind any pounding on a road. I was faced with a forced ‘rest week’. March plans now need to be reshuffled.

During my rest week at least I caught up on batch cooking, sending off last of my swim forms, plenty of sleep, and watching my endless sky+ recordings. I enjoyed the break from the non-stop lifestyle I have at the moment, but after a week, I was ready to get back doing something, instead of nothing.!

By Mid March, I was back ‘working as normal’, there was no way I could chase the missed training, so it was a case of draw a line and move on, do what I can for March, and call it as it was, an interrupted month, but not a lost month, it could have been so much worse.

What was great about March, the sea swims, 🙂 the water is still in single digits (avg about 9deg at the moment, a pool is 28deg!). But it’s time to start building back up the cold water acclimatisation. 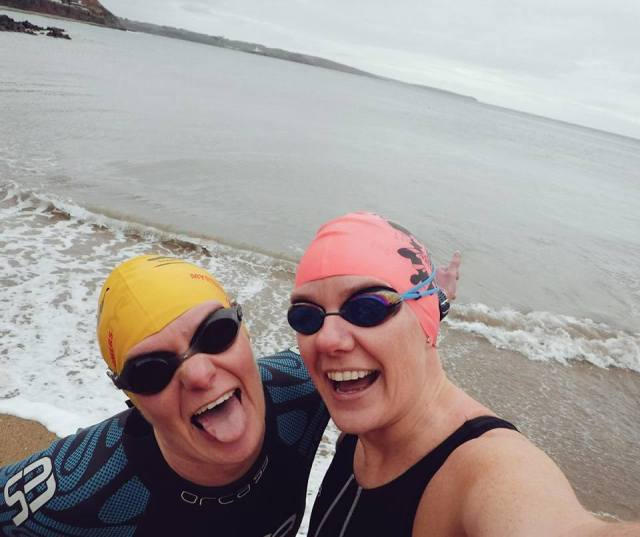 Now March is over, the blip in the figures was only a blip, I’m back doing everything I want to, finished the month with my rescheduled long swim, at least I still got that done, it’s great knowing that I won’t have to do 8+ hours in a pool again 🙂

Onwards to April, this is a 5 weekend month, so plenty of opportunity to fit everything in and still take my one weekend off a month (I’ve been doing that all along, it’s a great reset)..

Bring on the Chocolate, I can not wait for Easter Treats!.

Link to my sponsorship page for those asking, thanks CAROL.

This entry was posted in ALL. Bookmark the permalink.

Sandycove Island Swimmers - a state of mind as well as place.

Swimming as a bridge to social good

My journey from swimmer to Mermaid!